I have a quick announcement to make here, and then a bonus scene.

First of all, thanks to everyone who’s been reading along! I know a month is a long time between updates. Earlier on, I experimented with dividing chapters into parts and discovered that I really prefer the longer chapters. However, over time they’ve gotten a little too long–much longer than I originally intended.

So, here is what I’ve decided to do. I’m going to start publishing shorter chapters, with two illustrations, either twice a month or every two weeks. I have a number of other things on my plate at the moment, so we’ll see how it goes. I don’t expect it to be much more work overall, and this way the story will be a little fresher come a new installment.

If you didn’t read any of that, I don’t particularly blame you. Just check back in a couple of weeks for a new chapter. In the meantime, here’s a scene I cut from chapter ten. It didn’t really fit, but it’s a fun scene with Aaron and Carter’s dad and a bit of foreshadowing for events to come.

Raymond Lightheart frowned at the file, and then at the smirking jackass across the desk. “You’re kidding me, aren’t you?” He closed the folder and tossed it back to him. “Not going to happen.”

“The board wants this pushed,” Martin said.

“It’s not my call,” Ray said with a shrug. “They say it’s not safe yet. Rushing it won’t make it any safer.”

“I’m not saying we should turn it on immediately!” he said. “But the board feels that it’s being delayed unnecessarily. The deadline’s already been pushed back four times! This thing’s a big deal. It needs to happen. I mean, if it works— We’re talking Nobel Prize, here, Ray. Worldwide publicity. Unlimited funding—”

“If it explodes, you’ll get worldwide publicity, too. Just not the kind you want.”

“You’ve been talking to Terence and Alise, haven’t you?”

“Yes. Because they’re the lead scientists on the project. The shielding alone won’t be finished for another month. And you want to push testing?”

“Not immediately,” Martin said. “Of course we have to finish the shielding. But a six-month timeline—”

“Is necessary, according to everyone whose opinion matters. They say they need six months to run it safely.  Since I’m in charge of making sure things don’t explode, I listen to that sort of warning.”

Martin set his hands on his hips and leaned forward, with a smarmy, patronizing smile. “I’m not trying to make problems for anyone,” he said. “We’ll run the test in an isolated chamber, away from the main lab. Underground. We’ll do full quarantine protocol in case of a malfunction. We can do this safely. I’m still a scientist, Ray. I understand the risks, probably better than you do. I think the payoff is worth the risk. Marisa agrees with me. The whole board agrees with me.”

“Marisa is a geneticist, not a physicist or an engineer. Plus, she’s your wife.” He leaned back and crossed his arms. “Company regs says that you need my approval and the approval of the lead scientists. You have neither of those things.” He gathered the papers in a stack and tucked them neatly into the folder. “Like I said, I don’t get the physics. Which is why I listen to the physicists before the board. When they say it’s ready— ” He held the closed folder over the desk “— then you can come get my signature.” 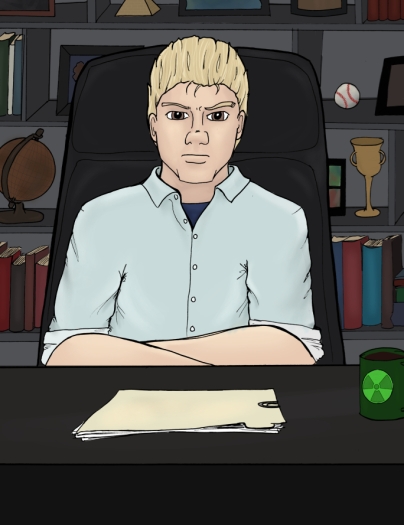 Martin snatched the file. “I’ll go talk to Terence, then.”

“You do that,” Ray agreed, leaning back in his chair. “I’ll get back to making sure your lab doesn’t explode.”

Ten minutes after Martin Marquez left, Terence Haley poked his mousy face through the door and said, “Uh, I don’t mean to bother you, but, uh—”

“Relax. I told him no,” Ray said without looking up.

“Oh. Good.” He hovered in the doorway for a moment, tapping his fingers against the wood of the door as if debating whether to leave. At last, he strolled in, and cleared his throat. “Um. Tori wanted to ask if you and Zoe were going to make it to the barbecue this weekend—”

“For Tori’s mom? The anniversary—”

Ray sighed. Obviously his attempts at seeming busy weren’t succeeding very well. “I don’t know. Ask Zoe. She’s the one who keeps up with all that stuff.”

“Right. Right-o.” Terence pushed his oversized glasses up his nose. “Oh, that reminds me!” he said. “I had a message from her; she said she wasn’t getting through to you. She was trying to set up a meeting with that neuroscientist. The one visiting from Canada? Dr…”

“Vandstrom,” Ray said. “I’d forgotten. Some old colleague or professor of hers or something. She wants him to have a look at Aaron.”

“Oh? Is he having problems?”

“The same old ones,” Ray said. “Zoe worries about him. Personally, I think he’d feel a lot better if he just got out and exercised like his brother. Sometimes all he does is sit around and mope.”

Vote at topwebfiction.com
Write a review